The unclaimed bastard child of King Uther and a Fae

A beautiful and proud man, Calthabor was conceived through a tryst by King Uther Pendragon. At the advice of Merlin the Magician to not allow a Fae to rule, Uther did not claim the child and sent him away.

Much later following Uther’s death, Calthabor returned to claim what he viewed as his heritage, but though Duke Ulfius acknowledged he was Uther’s son, he said he had no claim on these lands and sent him away

Calthabor is an intensely attractive man, who has been known to draw British knights into his service. His armour is an odd collection of overlapping plates, which has never been seen before in Britain.

Year 502 – The Remains of Uther Pendragon 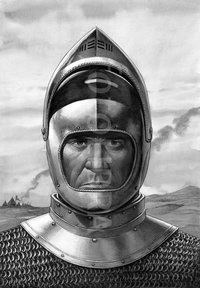