The count of Gwaelod, noted for his hospitality and his extensive wine cellar, which he directed most of his country’s efforts towards acquiring. Ruling from the Tower of the Sea, he was noted for his Hospitality where he would welcome any knight from a foreign land in exchange for stories of their travels.

When challenged by Sir Liam for the freedom of the Countess Traymor, he re-enacted the legendary Challenge of the Swan Knight, but ultimately Sir Liam was able to best him and he was slain in combat. 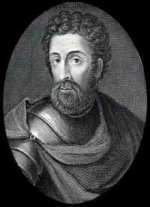