Earl of Salisbury, ascended during Anarchy

The elder son of Duchess Ellen, he was young when his father, Earl Roderick, was killed at St. Albans. Until he came of age, his mother ruled in his stead.

After a short time squiring for Sir Carver, Roland was knighted at only 17, and ascended to the throne of Salisbury. He is obsessed with protecting his father’s legacy, which has led to a great hatred of Traitor Knights.

He survived the Battle of Netley Marsh, but was unable to prevent the disintegration of the Logres alliance. At the second pulling of the Sword in the Stone, he did not swear to Arthur, but at the urging of his knights eventually gave in and became a reluctant vassal to the Boy King.

He has ruled with a less Just hand than his father, believing strongly in context, emotion, and reward for his knights. He survived the Battle of Terrabil, where he witnessed the death of the many traitor kings. 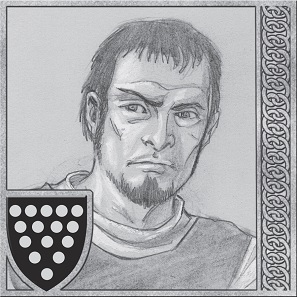