The son of Vortigern, and King of Wessex

A proven battle commander, Cerdic is the son of King Vortigern, the traitorous Saxon who murdered his way towards claiming the High Kingship of Britain. Banished from the country following his father’s death by Aurelius Ambrosius. He fled to the continent, where he has honed his battle skills and returned to Britain to claim his Kingdom.

His troops landed in Hampshire, and despite an initial skirmish from King Nanteleod, he was successful in ekeing out a small Kingdom. Since then, he has been making diplomatic overtures to other British Knights to rule under him, promising to unite Saxons and Britons alike – one way or another. 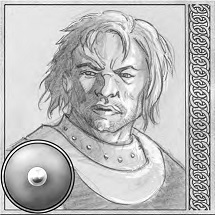