Knight of Stratford, and famous for his Cruelty

A Cruel knight, he was a vassal of Sir Gwyn of Clarendon. Known to enforce his Lord’s justice among the peasantry, and ensure they were paying the appropriate tributes, he was a strong knight that the peasantry had come to fear.

Ultimately he was driven mad by his loyalty to Sir Gwyn, and leaping from the battlements to better slay some rebellious peasants, he was brought down by them. 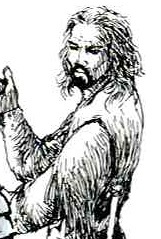